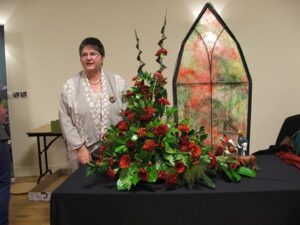 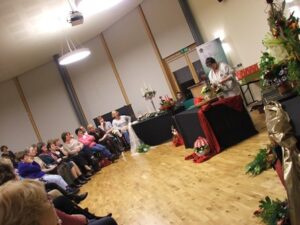 Solas Bhride had a full house for the Christmas Flower Demonstration by Christine Hughes, AOIFA. Christine enthralled all who were fortunate enough to attend with her amazing, artistic creations, such as the floral setting for a “Downton Abbey” occasion, “Christmas Cake”, “Plum pudding”, colourful swags and all shapes and sizes of arrangements.

Christine not only held the audience spellbound by her creations but also her anecdotal style of presentation. There were broad smiles on the 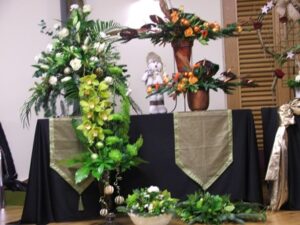 faces of those fortunate enough to scoop some of the prized creations in the raffle. Solas Bhride deeply appreciated Christine’s fundraising efforts and all who supported the demonstration on the night. 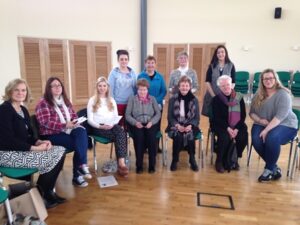 held at Solas Bhride on Saturday, November 21st. The session was facilitated by Srs. Mary Ryan, Catherine Dunne and Rita Minehan. This is a first in a series of training workshops which will be held in dioceses throughout Ireland. The issue is a growing concern because of the increasing numbers of people being trafficked globally. Ireland is now a source, transit and destination country for human trafficking. Further information available on www.aptireland.org

Reminder:   November 29th – People’s Climate March:
On Sunday 29th November walks will take place in the streets of Dublin, Cork and Belfast for Climate Change.
Millions of people will be marching in cities around the world on November 29th, in what organisers hope will be the largest climate change mobilisation in history, just before world leaders travel to Paris for the climate summit.
Dublin March: Custom House Quay, Dublin 1, 2pm
Cork March: Grand Parade, Cork, 2pm
Belfast Rally:

“Let us ask forgiveness of the earth,
For all our sins against her:
For our violence and poisonings
Of her beauty”
In Praise of Earth by John O’Donohue