History of Solas Bhride since 1992

The Brigidine Sisters began a discernment process in the early 1990’s with regard to their mission and the approaching millennium. Arising from that discernment two sisters, Mary Minehan and Phil O’Shea, came to live in Kildare town in 1992. They lived in rented accommodation for two years while awaiting their new home in 14 Dara Park. They opened a small centre for Christian Celtic Spirituality called Solas Bhride (light/flame of Brigid). The vision of the centre was to explore the legacy of St. Brigid of Kildare and her relevance for our time. 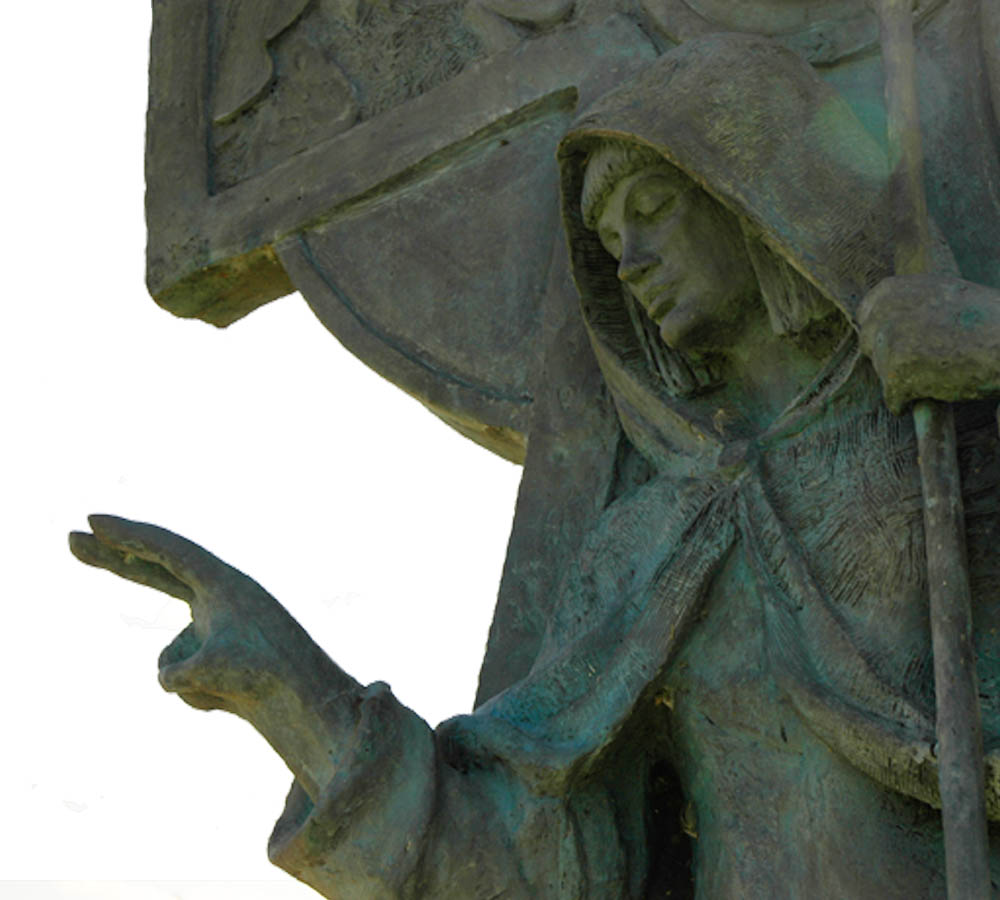 The following year, 1993, was a momentous one. Afri, (Justice, Peace and Human Rights NGO) invited the Brigidine sisters to co-host an international conference in Kildare town to mark the 10th anniversary of St. Brigid’s Peace Cross Campaign. The Conference was entitled: Brigid: Prophetess, Earthwoman, Peacemaker. Mary Teresa Cullen and Rita Minehan, both Brigidine Sisters, delivered the keynote address at the conference. Over 600 people participated from near and far.

St. Brigid’s flame, having been extinguished for centuries, was re-lit in the Market Square. Afri invited Mary Teresa Cullen, the leader of the Brigidine Sisters at that time to re-light the flame. As the conference concluded, a spark was taken from the flame and it is being tended ever since in Solas Bhride. (You can read more about the story of the flame when you visit the Brigid Room on this website).

The 1993 conference birthed some future developments for Solas Bhride. A group of women and men called Cairde Bhride (Friends of Brigid) emerged from the conference. Cairde Bhride is a small committed group who work with Solas Bhride to promote the spiritual and cultural heritage of St. Brigid. They welcome pilgrims, conduct workshops, create and participate in inspiring rituals and support Solas Bhride in a myriad of ways. Their voluntary dedication and expertise is invaluable to the mission of Solas Bhride.

Another offshoot from the Conference in 1993 was the creation and organisation of an annual Feile Bride (Festival of Brigid). The Feile attracts visitors from near and far each year and grows in strength, length and variety with each passing year.

“It is not a big trendy festival, but a gathering of people who want to celebrate the coming of spring, and who want to call Brigids’ qualities into the world, to light a spark for change.” Luka Bloom – Irish Singer/Songwriter

You can read more about the annual Feile….

The history of Solas Bhride has been extraordinary.  It captivates the minds and hearts of those who visit the Centre. We have welcomed people from almost every country in the world.

We share a flavour of some of the highlights of our story through the years. 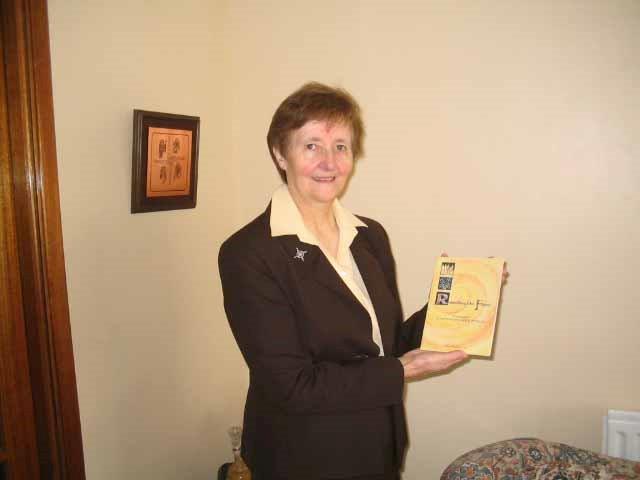 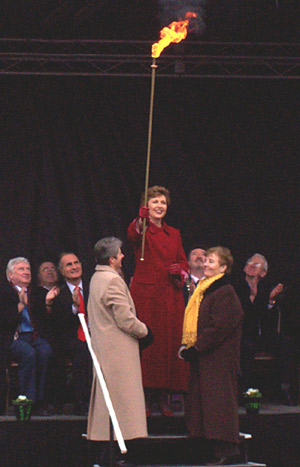 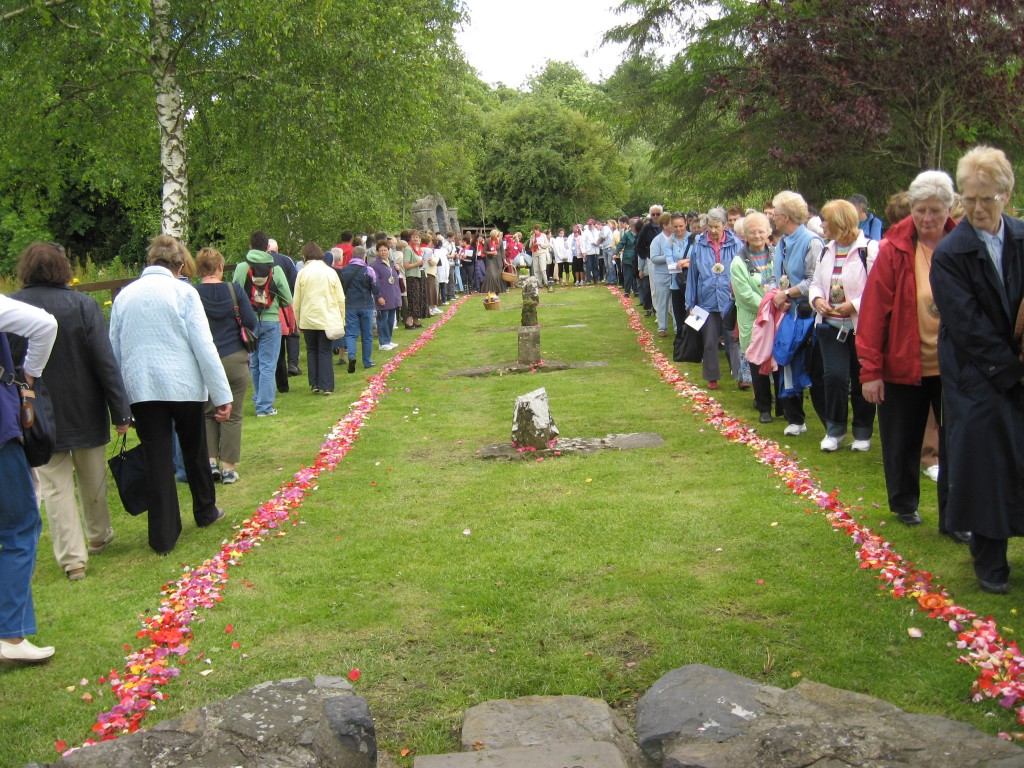 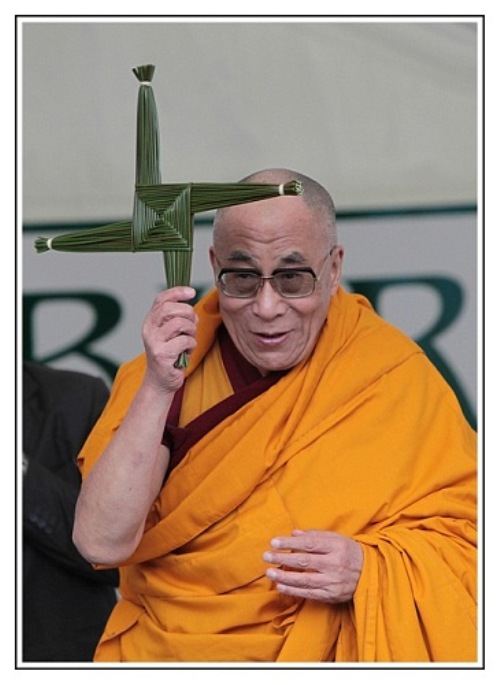 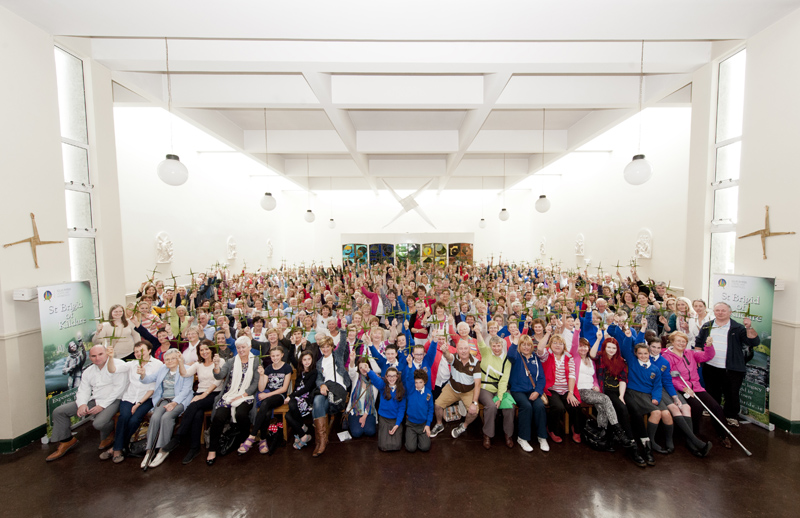 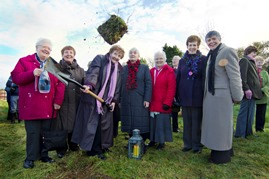 The Official Opening of the new Solas Bhride Centre

The new Solas Bhride Centre was officially opened on January 30th, 2015.  Eimer Quinn of Eurovision fame, was invited to cut the ribbon. It was a wonderful celebration. Fiona O’Loughlin, Mayor of Kildare in her speech at the opening ceremony congratulated Solas Bhride and said:

“Through you our lives are enriched, people are empowered, networks are developed and communities in Kildare grow closer together.  What a wonderful legacy! … there is absolutely no doubt but that this facility, given the care and attention that has gone into its development and its location close to a major road network and also in close proximity to other very significant attractions in Kildare town, will undoubtly allow the centre to develop not only into a national location for spirituality and reflection, but also internationally, giving our local and wider community and visitors to the area a unique experience, particularly in the areas of education, ecology, spirituality and healing.”

Brief History of the Brigidine Sisters

“From the Acorn to the Oak”

“Tall oaks from little acorns grow.” The presence of a tall, sturdy oak tree in the convent grounds in Tullow is a testimony to 202 years of Brigidine history. The Sisters of St. Brigid were restored by Bishop Daniel Delany, in Tullow, Co. Carlow, on 1st February 1807. On that day, Eleanor Tallon, Eleanor Dawson, Catherine Doyle, Judith Whelan, Brigid Brien and Margaret Kinsella gathered in Tullow and became the first Sisters of St. Brigid. All had very little formal education but were trained as catechists by Daniel Delany.

Daniel Delany founded the Congregation in response to the urgent need for education for life and faith at the time when Ireland was emerging from the oppressive Penal Laws. The Brigidine Annals record that he restored the ancient Order of St. Brigid to the dioceses of Kildare and Leighlin. He planted an oak sapling from Kildare in the grounds in Tullow to symbolise the historic link.

The Brigidine Sisters opened day and boarding schools throughout the diocese, going to Mountrath, Abbeyleix, Goresbridge, Paulstown and Ballyroan. The Brigidine tree kept expanding. They conducted schools in Australia and New Zealand by the end of the 19th century. They spread to new lands in the 20th century – to Wales, England, the United States and Papua New Guinea.

Following the Second Vatican Council in the 1960s Brigidines, like other congregations, moved from large convents into smaller houses, living in housing estates alongside their neighbours. The renewal of religious life led Brigidines to hear anew the cry of the poor people in disadvantaged areas and in the developing world. Brigidines responded by establishing missions in Mexico and Africa and by working in partnership with other lay and religious groups in South America, Iceland and China.

Brigidines began to diversify their ministries in response to new needs around them. We minister in parishes, hospitals, prisons and as home-makers, counsellors, spiritual directors – to name but a few areas of ministry. We work with those who are searching for a spirituality that is relevant for today’s world. Teach Bhride, the former novitiate in Tullow, is now a Residential Holistic Education Centre. Solas Bhride, in Kildare, caters for pilgrims from all over the world.

There has been a strong justice and peace thrust in the congregation for the past few decades. The development of the Brigidine Associates, Co-workers and Cairde Bhride in the Irish/UK Province has been significant. They promote the vision and mission of the congregation. We engage with issues such as the welfare of the planet and the plight of displaced persons. Brigidines sponsored and help in managing a Hospitality Centre for Asylum Seekers in Tallaght. The trafficking of women and children for commercial sexual exploitation engages our attention and action. We have participated in setting up a “Safe House” in England for trafficked women. The Congregation works on these issues in partnership with UNAMINA, a coalition of religious congregations working at UN level.

When one looks at Daniel Delany’s legacy, there is much to proclaim and celebrate. We had a wonderful bicentennial celebration in Tullow in 2007. The theme chosen for the celebration was: “Heritage and Horizon”. Mountrath was the second Brigidine branch from the Tullow oak. We celebrated the Mountrath bicentenary on April 19th, 2009 when over a thousand past pupils and parishioners joined us for a wonderful re-enactment of the arrival of the Brigidines in Mountrath and for a very meaningful and uplifting liturgical celebration afterwards.

It is still nurturing acorns that hold dreams of possibility. The horizon keeps beckoning. Brigidines and co-workers, with the vision of Daniel Delany and the spirit of Brigid of Kildare, continue to sow seeds that further the reign of God – a reign of love, compassion and justice for humanity and for the Earth. 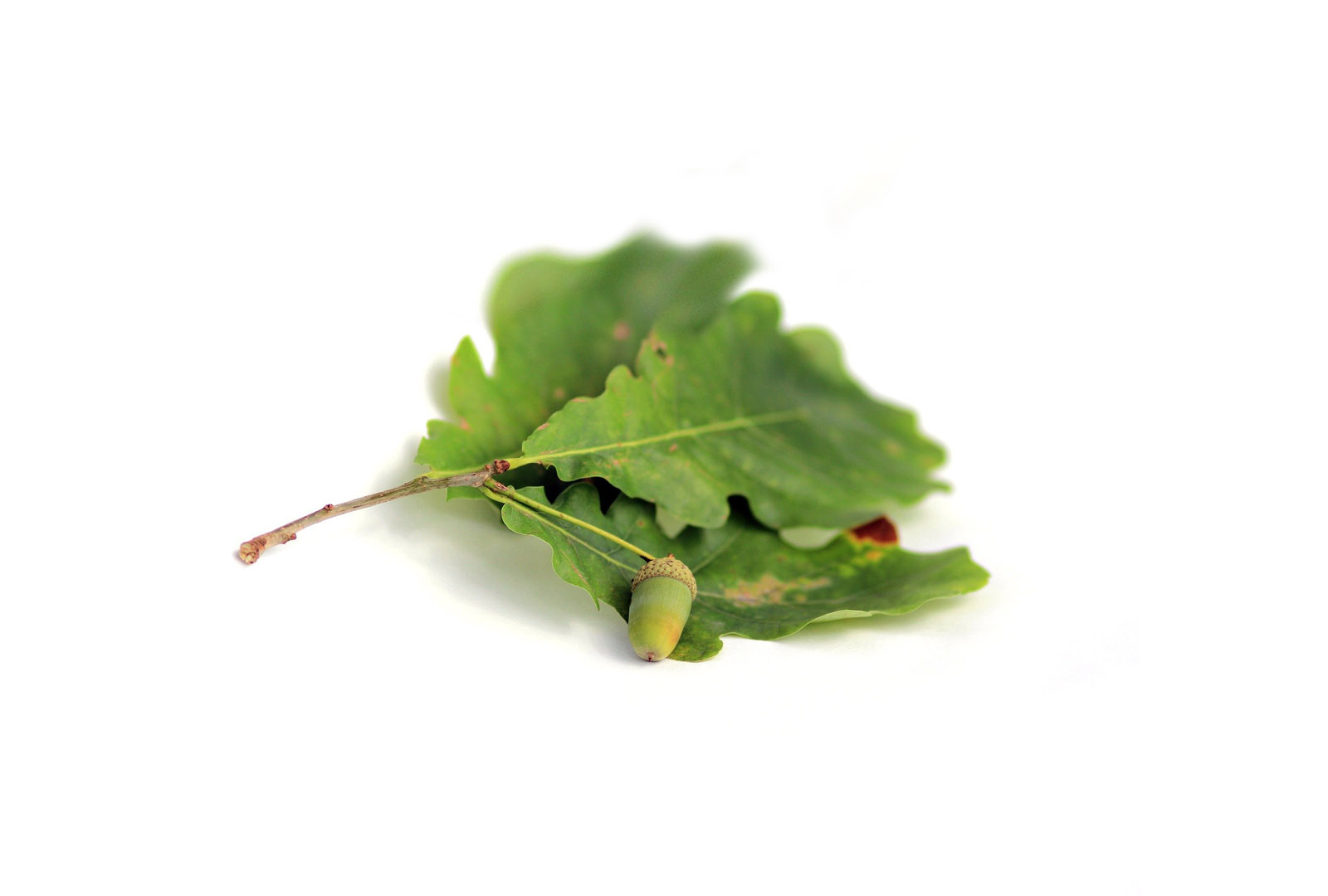 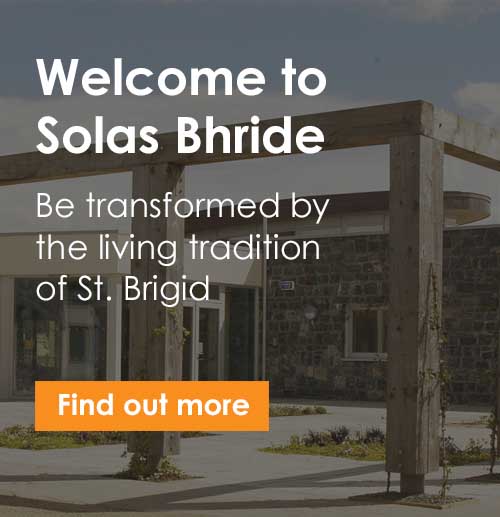 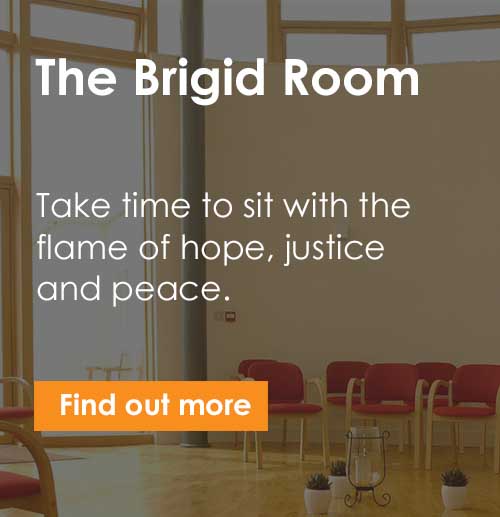 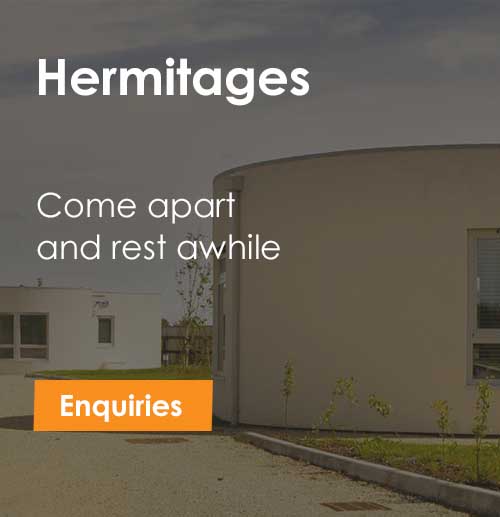 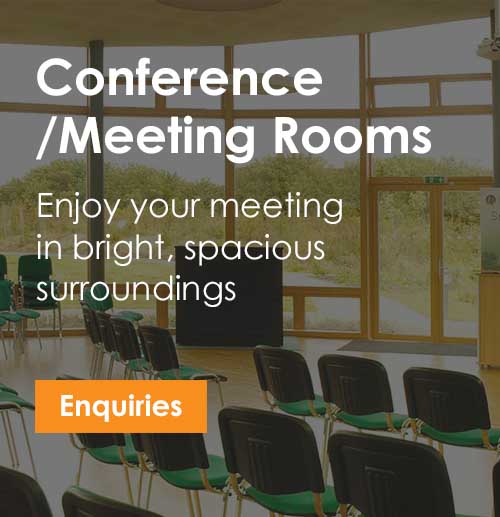